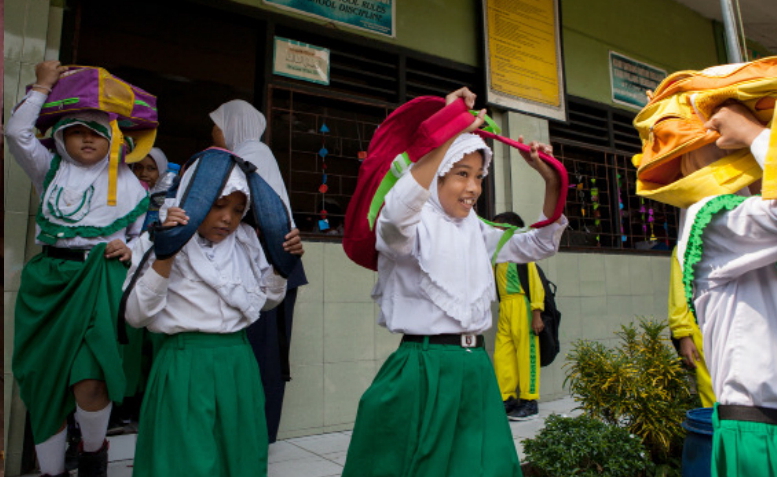 The Government of Indonesia has shown strong commitment to ensuring school safety. The Disaster Management Law and National Action Plan for Disaster Risk Reduction acknowledge education as one of the priority sectors. In 2010, the Ministry of Education and Culture established the National Secretariat for Safe Schools (Sekretariat Nasional Sekolah Aman – SEKNAS) issuing a circular letter that encouraged the mainstreaming of disaster risk reduction into the school curriculum, and created a Special Allocation Fund for safe school rehabilitation.1 In 2012, the government issued Guidelines for the Implementation of Safe Schools and Madrasas (Islamic schools).

With funding support from the Government of Australia, Department of Foreign Aﬀairs and Trade (DFAT), the ASEAN Safe Schools Initiative (ASSI) was initiated in Indonesia since October 2014 and promotes school safety in Indonesia. In Indonesia, ASSI is implemented by three ASSI consortium members – Plan International, Save the Children and World Vision. The range of activities include the following:

The two case studies presented here focus on the good practices in the two pilot schools in North Jakarta. The initiative focuses mainly on strengthening CSSF Pillar 2, resulting in some activities in CSSF Pillars 1 and 3.

Al Muzayyanah, an Islamic school with 222 students and 14 teachers, is located in a flood-prone area near the Gubug Genteng riverbank. Flooding is a regular incident that affects the school once or twice a year. When the heavy rain starts, the water could reach up to 50 centimetres in the school, and up to a metre in the surrounding low-lying areas.

Over eight months, World Vision, a member of the ASSI consortium, worked closely with the madrasa to strengthen the capacity of students and teachers in assessing disaster risks, developing and implementing action plans, and creating standard operation procedures for emergencies.

The teachers and students started with conducting a risk assessment using visual methods, facilitated by World Vision. To get students’ perception of risks, the teachers lent them a few cameras, which they used to take snapshots of the vulnerabilities that they face. In a meeting, the students discussed their ﬁndings with the teachers and the facilitators, and suggested interventions to reduce their risk to flooding. This method proved successful in gaining the active participation of students in the risk assessment.

“If we did not involve the students from the beginning, we would not know what the students’ exact needs are when flooding occurs. An example was the path in front of the school. As adults, we never realised that the path on the ditch was too narrow for the children. We thought that the path was one. Yet through their eyes, it was a problem particularly during evacuation as the children might push each other and the smaller kids could fall into the ditch.”
– Irwan F., fourth-grade teacher at Al Muzayyanah

Following the risk assessment that involved teachers, students and parents, the construction of a two-metre tall, ten-metre long wall behind the school was agreed upon as a risk reduction measure to prevent flooding in the school, and to stop communities from littering their backyard.

Another issue identiﬁed during the risk assessment was insuffcient toilets. The school only had three toilets. The intervention to build additional toilets aimed to improve the school’s sanitation and hygiene, promote good hygiene practice, and reduce the risk of water-borne diseases.

To strengthen the school’s disaster preparedness, World Vision organised a two-day training of trainers for seven teachers on emergency response, first aid and health-related issues. The trained teachers then passed on their learnings to the students, and established a school disaster preparedness team.

Scenario of a School Drill Conducted at Al Muzayyanah Madrasa

“The water level has reached 30 centimetres in our school yard.”

“Please walk to the mosque using the evacuation route.”

A woman’s voice could be heard from a loudspeaker several times that morning. After the announcement, the teachers organised the students to march in order to the mosque, which had been agreed by the school and the surrounding communities as the evacuation location whenever flood hits this area.

Suddenly, a student fell down. A couple of students helped him and carried him to the mosque.

After they arrived at the mosque, the teachers organised the students and did a quick headcount. A teacher made a phone call to a mother and informed her that she could pick up her daughter from the mosque.

“I’m happy that my daughter is active in the disaster preparedness team in her school. Today, she can perform first aid for her family at home.”
– Nurjannah, mother of Hanna, a fifth-grade student at Al Muzayyanah

“They are now aware that if they litter, the trash could block the ditch and it could lead to flooding.”
– Subani, teacher who oversees the students of the disaster preparedness team

The initiative motivated the school to further develop the capacity of their teachers and students to ensure school safety. Through the school’s own initiative, the teachers and the school disaster preparedness team received first-aid training from the community health centre and the Red Cross at no cost to the school.

Save the Children started the initiative by facilitating a risk assessment with the teachers, students and parents. One of recommendations that came from this exercise was to form a school disaster preparedness team, which they named Disaster Preparedness Friends (Sahabat Siaga). The students were tasked with roles and functions such as conducting early warning, coordinating evacuation and administering first aid. The team consisted of 28 students (13 boys and 15 girls from grades four to six) who were trained by the Indonesian Red Cross to administer first aid. They were also trained to coordinate the evacuation process. Students had to undertake a written test to assess their motivation to be the team members and as it turned out, more female students signed up and were selected as members.

From the risk assessment, the school also realised that desks with sharp corners are dangerous for the students. Thus, the school decided to replace all sharp-edged desks with round-edged ones in order to reduce the risk of injury. By February 2016, the school targets to have all their desks round-edged.

To raise disaster awareness in the school, the teachers and students worked together to devise creative ways to deliver school safety messages, for instance, through a lenong (or hand-puppet performance) and through songs, role play and games. There were four girls in the hand-puppet group. They often performed the hand-puppet show to deliver school safety messages. “Mr. Jamal helped us the first time we wrote the dialogue. After that, we created the show by ourselves,” Sintia, a fourth-grade student said proudly. Teachers also made use of the training received by Save the Children to incorporate disaster risk reduction topics in the classroom and in extra-curricular activities.

The school principal was very active in raising disaster awareness and involving the community and government in school safety activities. The principal’s active networking with government officials, including the Ministry of Religious Affairs, resulted in the issuance of a letter of support in the implementation of school safety.

There is evidence of strengthened capacity in disaster preparedness and emergency response, and change in behaviour among both teachers and students.

Following the school drill, the school management became aware of some of the unsafe features of the school. For instance, there is only one narrow stairway from the second floor to the first. The school is now planning to build another stairway.

Karmila, a teacher at the school, noticed that teachers have started to volunteer to help in flood response as the school acts as a temporary shelter during floods.

“Previously, the principal had to call us and instruct us to be volunteers to organise the temporary shelter in case of a flood, but now teachers are proactively volunteering to help.”– Karmila, teacher at Al Muttaqien

“The children who are par”cipating in the Disaster Preparedness Friends are more confident in expressing their opinions.”
– Taufik Halit, teacher at Al Muttaqien

Parents also noticed changes in their children’s behaviour, and their increased knowledge on disaster preparedness and risk reduction. The children tell their parents about their activities in disaster risk reduction at school. Sintia is a good example. “I practice the skills I learned from the training in the school with my dad or my mom,” she said.

Andre, a fourth-grade student at the school, was able to administer first aid during a flood in February 2015 near his home.

Andre was able to administer first aid to those who were injured, including our neighbour who fell out of a vehicle and was injured by a shard of glass. After the flood, our first aid kit provided by Save the Children was used up. From that experience, we have committed to always replenish the first aid kit.”
– Rini, Andre’s mother

The change in behaviour is also evident from children’s reaction to disaster events. Previously, whenever there was a fire, children would get curious and just watched the fire. Now, when they see a fire, instead of watching, the children would run to their homes and report it to their parents.

Key Learnings and the Way Forward

Behaviour changes take time for all stakeholders, including for teachers and community members. During student-led risk assessments, it was found that the teachers were still in control and made the decisions, for example, in determining the evacuation route or developing notices for the bulletin board. In Al Muzayyanah Madrasa, the community continues to throw trash into the school backyard despite the construction of a wall. Al Muzayyanah plans to involve the local government officials in this mafter, and has asked World Vision to facilitate dialogue.

Strong leadership skill is needed by the head of the school to encourage other school members and the surrounding community to participate in school safety initiatives.

Creative and innovative ways of integrating disaster risk reduction issues in the school curriculum and in teaching should be explored, documented and incorporated in the training for teachers. They include the use of games, role play, songs, dance and theatre.

As the school and the community better understands the risks in their environment through risks assessments, and gets involved in building their resilience to disasters, ideas and solutions to further strengthen their resilience emerge. For example, Al Muttaqien is seeking funds from its foundation to retrofit the roofs that are infested by termites, and are at risk of collapsing.

These two schools are now model safe schools with experiences and lessons that can be shared with other schools nationwide and worldwide. The INGOs involved have plans to replicate the initiative in other schools.